We’d like to draw your attention to an article entitled ‘What Can You Tell About A Woman From Her Shoes’ that appeared in a 2014 Issue of Men’s Health. In it, the authors cite a 2012 study from the University of Kansas, which asserts that “people are able to accurately judge 90 percent of a stranger’s personality, including their emotional stability, simply by looking at their most-worn pair of shoes.”  Well, we haven’t seen the study, nor are we interested in disputing its findings. But we are very interested in your acumen (or, more likely, the  lack thereof) for women’s footwear because we think that this is more practical in the context of coaching you as you embark on your dating adventures.   Why?

(1) Even if you wanted to, you can’t apply the results of the above study if you don’t first have a solid working knowledge of women’s footwear.  Moreover, though, there is definitely value in ascertaining the emotional stability of someone by assessing their most worn pair of shoes, we feel fairly confident that most people don’t wear their most worn pair of shoes out on a date. So, in the context of dating we feel it is much more important, pragmatic and constructive to teach men about what actually lies behind the doors of a closet dedicated to shoe apparel before they go much farther.

(2) To even get beyond an initial introduction to a lady of interest, you will need to sustain her attention and you should be able to converse about more than just what you are comfortable with – i.e. you need to be comfortable out of your comfort zone. Women’s shoes are a great example of a “high yield” topic with which you should be familiar.  If you are seeking a long-term relationship, which most of my clients are, the chances are good that you will spend quite a bit of time shopping with your significant other or at least enough time that you will want to know a thing or two about women’s shoes.  Our clients tend to be interested in fashionable women, and fashionable women tend to appreciate men who have some appreciation for women’s shoes. After all, some of the women you will meet will have quite an obsession with shoes, possibly own hundreds of pairs, including some that have only been worn on a single occasion.

Let’s pose a question to demonstrate what you probably don’t know… and don’t feel bad… you are in the great majority of men on planet Earth if you don’t know the answer to the following question. Here it is: What’s the difference between a slingback espadrille wedge and a peep-toe ankle strap platform wedge?

Most of you are computer savvy. So if you look up “espadrille” you’ll find a Wikipedia entry that reads as follows “Espadrilles or alpargatas are normally casual, flat, but sometimes high-heeled shoes originating in the Pyrenees.”

Wedges, which were made popular by Salvatore Ferragamo, also have their own entry, which reads “Wedge boots, wedgies or lifties are shoes and boots with a sole in the form of a wedge so that one piece of material, normally rubber, serves as both the sole and the heel.” 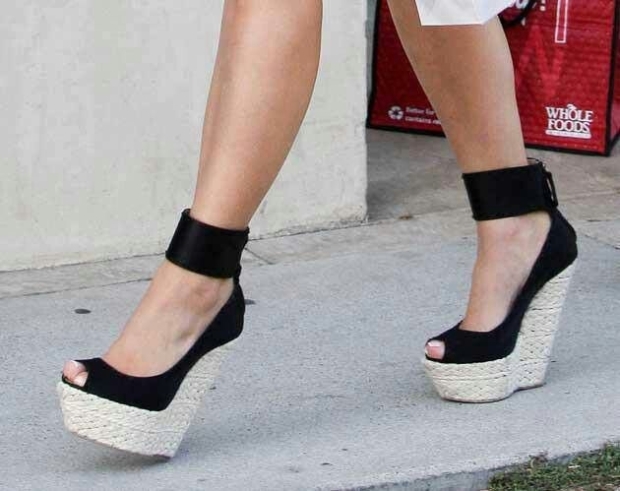 We are assuming that you don’t have the time or inclination to do a ton of “field research” on things like this.  As such, we are here to help.

Rather than reinvent the wheel, we decided to introduce a comprehensive infographic covering just about every contemporary shoe style you might find in a woman’s shoe closet……

Pop-Chart Lab published the Charted Collection of Contemporary Footwear (and we think it is pretty phenomenal and helpful.)

So with that introduction, we direct you to the following infographic. For the guys out there, the next time you’re at the mall running some quick errands consider our advice and head to women’s shoes in a high-end department store. Strike up a conversation and ask a cute girl trying on a pair of d’orsay pumps her opinion on which shoes she would recommend getting for your sister/mother/aunt/cousin/etc. It’s a “target rich” environment with high yield potential for single guys or dare I say someone with a serious foot fetish.;-)