Our client is 57, but looks 47, 6’5”, 225, mesomorph without a workout fetish. He’s follically evolved, has kind green eyes, and a dazzling smile behind his Italian lips that masks the PTSD he experienced as a child with an army of metal wires in his mouth. Midwestern to the core, he still lives and dies home state sports and travels back regularly for games and to visit family. A man’s man, he always counseled his sisters never to trust an American who didn’t like football or a European who didn’t like football (the real kind).

He is overeducated. B.A (yes A) Mathematics, MS and PhD with a four-syllable major from Stanford. Tenured at a very prestigious university in the Bay Area. His motto is “Those that can do, those that can’t teach, and those that can’t do either become administrators”. He has compensated for his faculty salary (he told us “it’s good for the soul”), by founding successful startups and advising major corporations in technical intellectual property.  He’s also stepped in same, advising VC’s and Hedge Funds for over two decades.  Currently he is advising/BOD member of 4 startups in series A and B rounds.  La ti da.

But that’s not all. He plays jazz piano (and actually gets paid to do it) at venues in the Bay Area. He received his music education from a well-known music conservatory in the last century and often waxes poetic about the past (he’s truly an old soul). He also is an accomplished ballroom dancer, having won dance contests in dive bars over the years.  And there’s more yet. He also played D1 sports in college. His passion now is golf, holding a 3 handicap. However, don’t worry, he only plays about once or twice a week. He’s almost always the life-of-the-party and can regale you with life experiences such as searching for buried treasure on three continents.

He’s a grateful empty nester. He was married for 14 years, and is devoted to his son who is a college sophomore in southern California focused on baseball, study and girls (but not necessarily in that order).  He’s anticipating the next stage of his life and would love to find his muse. He’s looking for someone who is a yin to his yang. His ideal woman would be 40-60 years old, have humor, kindness, and be down-to-earth. She’s honest, adoring, fun, compassionate, and has sex appeal–perhaps a cross between Madeline Kahn and Sofia Vergara.

If you or anyone you know might make an exceptional match for our dynamic client, please email founder/CEO Amy at: amy@linxdating.com

Thank you and have a great holiday weekend! ❤️✈️😘✨

If you are stumbling upon this site and blog for the first time and unsure of what it is like to work with a professional matchmaker, look no further.

Let’s begin with that Linx Dating is. Linx is an offline boutique curated dating and social network located in the heart of Silicon Valley.  Founded by Amy Andersen in 2003, Linx has now been matching high caliber, relationship-minded Bay Area professionals for more than a decade.

A couple of general misconceptions stem around our demographic and that we just focus on matching wealthy older men and young women under 30 OR much older women with young men aka “cougar” dating.

Often prospects have read active searches on the Linx website and conclude because some of these select profiles describe representing young women that we must not work with women over 30. The reality is we represent many women of all ages from 20’s to 70’s.

We do know how the “cougar” concept happened and that was from being part of a feature story on Linx in Vanity Fair.  Linx is responsible for creating truly a social phenomenon in Silicon Valley at the iconic Rosewood Sand Hill Hotel and the legend continues years later. It seems like everyone has heard about the hotel and the dazzling Thursday night scene. It was all from one mixer Linx hosted at the hotel that the social scene EXPLODED with popularity and then truly became worldwide news after the VF story published.

Though our current focus remains on San Francisco and Silicon Valley, we represent eligible men and women across the U.S and around the world.  In fact, it is not uncommon for our clients to request that we conduct nationwide (and sometimes even global) searches as we help them in their quests to find true love. We represent a select handful of international VIP clients who reside across the Middle East, Europe, and Asia. These clientele include CEOs, founders, prominent public figures, financiers, and members of royal families.

Beyond being a matchmaking firm, Linx is also a robust network of highly educated Silicon Valley professionals.  If you are new to Silicon Valley or the Bay Area and would like to make connections in a given industry or sector, this is a great way to network and expand your connections. In fact, though dating is our specialty, some of our most unexpected success stories have come from countless platonic social and business connections that can trace their origins to the broader Linx network.

Linx works exclusively with college-educated nonsmokers (in fact, roughly 75% of our clients have pursued graduate-level education) and we pride ourselves on meeting each and every member of the Linx network in person.  Our vetting process is significant, and all Linx clients complete at least one interview as well as significant “homework” as we get to know more about them, their goals, and what they hope to find in their next relationship.

There are no complex matching algorithms at Linx but there is a comprehensive proprietary database and a human brain (Amy Andersen) that has interviewed every single one of the thousands of people in the database. In the style of Malcolm Gladwell’s Blink, Amy has a highly developed sense of pattern recognition and intuition around people and what potential matches will work and those which are less likely to succeed. We are also a very small team; our clients are not handed off to junior staff or assistants once we decide to work together.  Our approach to matchmaking is team-based, and remains so for the duration of our relationship.

Though Linx has been fortunate to receive regular inbound requests for interviews and other media coverage, we neither advertise nor retain a PR firm – we take tremendous pride in staying away from buying up expensive ads in glossy magazines and airline publications to market ourselves.  We simply do our jobs well, as the vast majority of new clients come to us through referrals from past and current clients.

Our clients also appreciate our discreet approach to matchmaking, and value the importance we place on their privacy.  Client confidentiality is a core value at Linx, and we take the unusual step of not maintaining a cloud-hosted database.  It may seem like an unnecessary measure to some of our clients, but it’s definitely a source of comfort for others.

Linx is also unusual in that our matchmaking process is done client-to-client.  We represent both men and women as clients, which is rare in an industry that tends to focus on men.  We find that the successful, well-educated men of Linx appreciate and value that women are equally committed to this process, and also financially invested; when both parties approach an introduction with equal gravity, they tend to have greater respect for each other, and are more open to the possibilities that can result.

Linx is featured in this month’s Town & Country annual Top 50 Bachelor’s issue. Ladies, grab a copy today to check out T & C’s list of the most desirable bachelors hitting the singles scene. These guys range from: Sergey Brin, Aaron Levie, and Uber’s Travis Kalanick to name a few. 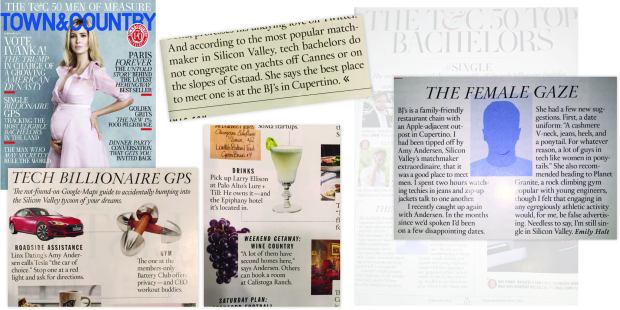 Linx was asked to name some of my picks of where the techie bachelors go when not working and the toys they like to spend hard earned dollars on. In summary, ladies head to BJ’s in Cupertino on a Thursday for happy hour.

BJ’s is very casual and is a chain restaurant- think nachos, beer on tap, big screens, and a lot of guys! This is across the street from Apple’s campus and is swarming with techies in black turtlenecks with iPhone in hand and beer in another. Now please don’t mistake BJ’s for the next Rosewood Sand Hill Hotel swanky scene. It is anything but upscale! 😉

Ladies, dress casually yet chic and don’t forget a ponytail if your hair is long enough. As I told Emily Holt in T & C, guys love ponytails- especially the techies! Remember they tell me everything!