Where can a powerful woman find a prospective mate? Work and the gym are often out—and, increasingly, top-tier matchmakers are in. Paula Froelich reports on the new breed of high-end love gurus and their wealthy clients.

A couple of years ago, during a rooftop dinner in Chelsea celebrating Eric Ripert’s PBS show, Avec Eric, Martha Stewart was overheard complaining to her dinner companions, “I can’t get a date. You know anyone you can set me up with?”

It’s a familiar complaint uttered by single women all over New York. There are blogs, endless newspaper columns, and television shows devoted to the hapless single lady looking for love. But the ladies in the top financial tiers have an even bigger problem. Not only can they not pick up guys in bars for fear of appearing on Page Six, they can’t shop online without knowing that somehow their profile will mysteriously appear on sites like Gawker, which will mock them mercilessly. Or even worse—as in the case of Paula Zahn’s millionaire husband, Richard Cohen, who was caught using Match.com to date and dump women after telling them they were his “soul mate”—their dating peccadilloes and seemingly bad behavior also might be chronicled by the city’s tabloids. 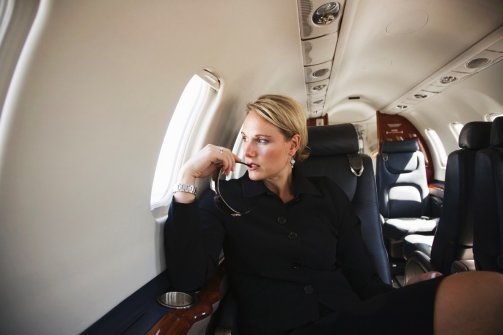 And if the women go out too much, it could hurt their reputation, says Amy Andersen of Linx Dating. “A really powerful, high-caliber woman, when it comes to her personal life, she should make it as private as possible,” she says. “A lot of these types are going to charity events to try and meet men. They shouldn’t hyperexpose themselves and become a depreciating asset, so when they are introduced to the right guy, he hasn’t read about her everywhere.”

Some, like Katie Couric, have magical friends who just happen to know nice, wealthy, single financiers, and get set up that way. But more often than not, those men, the elusive unicorns of the dating scene, are dating younger, not-so-powerful women. Even supermodels find it tough. Bar Refaeli recently complained to Conan O’Brien, “Let’s put it out there. No one hits on me.”

So what’s someone like Arianna Huffington, socialites Marjorie Gubelman or Tinsley Mortimer, or even poor Bar to do?

Increasingly, high-powered women are turning to matchmakers—some of whom charge up to $200,000 a year—to help them find love (Note: we have no idea if any of the single ladies mentioned above have ever worked with a matchmaker.) And we’re not talking someone like Bravo’s cantankerous Millionaire Matchmaker star Patti Stanger, who holds cattle calls with random people to set her wealthy clients up with. The new breed of high-end matchmakers is highly selective, running background checks not just on clients but potential dates, and they say they accept, at the most, 25 percent of potential clients, the majority of whom are women.

Margaret Griffith, who heads the New York office of Premier Matchmaking, says, “We get a lot more inquiries from women than men” in New York. That sentiment is echoed by Amber Kelleher, head of Kelleher International, who adds: “What’s hard for women is you don’t know if the guy you just met is married or has a stable job. Attractive women have a harder time. There’s no screening process. They like the security of us meeting them first. Granted, we can’t guarantee if the guys are as good as they sound, but if these men are going to submit to a background check and a litany of questions, they must be at least interested and sincere about getting into a relationship.”

Griffith adds that wealthier, high-profile clients have a harder time meeting prospective mates, as “there are challenges. It’s not the best of ideas to date within your work circle. And as these women spend so much time at work, there is a lack of exposure. Where does a typical person go? They go to the gym in the morning—not a great idea to date someone at the gym. If it doesn’t work out, then you have to change schedules or gyms. After work, they have clients and socialize. They can’t date their clients!”

“Men are intimidated by high-powered women,” says Kelleher, who has worked with Lady Victoria Hervey and Tia Carrera. “Dating in New York is even tougher. Because of the nature of the city itself and working, you have a tougher skin. There’s always an edge.”

And as many of the wealthy women are well known, their public persona can stymie the process.

“People like Martha Stewart’s reputation precedes them,” Kelleher added. “There’s an immediate intimidation—but I’m like an agent. Not to falsely sell somebody but find qualities I really love, and I touch on those qualities. I turn an icon or title or an unknown with an intimidating profile into a human.”

In practice it can be difficult. The traits that got the women to the top in business are usually what disqualify them in love.

“It’s very challenging for high-powered women to get a date,” says Andersen, who specializes in Silicon Valley millionaires. “They’ve had to adopt certain characteristics to get ahead—aggression, being tough, ball busting—and in the dating world they will carry over more masculine characteristics, and guys don’t want that. I do a ton of date coaching to play up all strengths: never downplay your smarts or success but dealing those cards in the right fashion, accentuating your femininity. Not downplaying your achievements, but let the man be the fricking man!”

“I was a matchmaker to a well-known, high-powered man. I was sitting in his Bel Air home interviewing him and he had some friends over. A young woman happened to walk past him—she was probably 27 and was a friend of his daughters’—when she backed up into a table and knocked over a $50,000 vase. Now anybody else, an older woman would have been so embarrassed, apologized, or been shocked. This young girl starts laughing, looks at me, laughed and said, ‘Look at that—I come to introduce myself and I make a klutz out of myself!’ She walked away and my client said, ‘Did you see what just happened? That’s what I want! That type of fun!’ And that’s what it is—women lose that fun. Women who are high powered are not very fun. They offer a job, an education, looks, but there’s such a hard edge. All guys want is somebody who is soft, feminine, who feels good. They don’t need to feel protective or challenged. A 50-year-old man doesn’t want that. But it’s hard for women in New York to not be the woman they are at work in their personal life. Women in New York are survivalists.”

Ah, that old nugget again. “You’re too manly!”  “You’re not young/fun enough!” It haunts many women who’ve made it to the top of the ladder. Perhaps that’s why many powerful women end up in role-reversal situations. Women like Lucky magazine editor Brandon Holley, Glamour magazine’s Cindi Leive, and HollywoodLife.com’s Bonnie Fuller all bring home the bacon while their husbands—a guitar player, a film producer, and an architect, respectively—contribute a secondary income. But while it may have worked for these three, such role reversals don’t always take.

“I get divorced women saying ‘I spent 20 years supporting my husband and I can’t do that again,’” says Kelleher.

And then there’s the cougar syndrome. “A lot of women, if they’re older, want to date younger men at first,”  says Kelleher. Like Jennifer Lopez, who after splitting with Marc Anthony started dating Casper Smart, a dancer 20 years her junior, “women emerging onto the dating scene will typically gravitate toward much younger men,” Griffith says. “It’s sexually charged and fun, but it fizzles because this woman is used to specific things, like jetting off to Hawaii. The boy toy can’t keep up financially.” (You listening, J.Lo?)

Griffith adds: “The best type of match for a high-end woman is someone at the same financial strata, if not higher. It can be really threatening for a lot of guys who don’t make as much money. They can say they’re cool in the beginning, but it catches up to them and bites them in the butt in the end.”

But perhaps more interesting is the 50 Shades of Grey trend. Every matchmaker contacted admitted to female, and male, clients bringing up the sexually explicit S&M-themed novel.

Says Andersen: “A couple of individuals have said they want a Christian Grey … they don’t necessarily say they want to be dominated, but they do ask for that character.”

“Most [high-powered] women, when they come home, want someone else in charge,” Kelleher says. “We all want to be a passenger in someone else’s car, but you gotta find the right guy.”

And that is harder than it seems. The Daily Beast heard a story about one wealthy woman who was set up with a well-known Silicon Valley billionaire who has a famously open marriage.

“She was shocked. I mean, this guy is instantly recognizable,” the woman’s friend said. “She was like, ‘Aren’t you married? And why the hell is a matchmaker setting me up with you?’”

All of the matchmakers contacted for this story say they do not work with married men, but one adds: “It is difficult. We all do background searches, but if we do one on a Californian man, the test may show he’s not married in that state, but he could be married in Idaho. No one does searches to see if someone is married in all 50 states.”

But by and large, the matchmakers claim a high success rate—all say that is because they screen their clients as well, and all three say they have refused difficult, rigid clients—as wealthier women start to view them not as a dirty little secret anymore but as a necessity.

“Women are warming up to getting used to doing something like this and using our services,” Andersen adds. “I mean, they outsource everything else in their life—fitness, jobs, cleaning—so why not this?”

Paula Froelich is the New York Times bestselling author of the debut novel, Mercury in Retrograde. Previously at Page Six, Entertainment Tonight, and The Insider, she is now blogging for the Sundance Channel, working on her next novel, a radio show, a TV show, and other projects.

Our featured song for this entry is Missy Elliot Work It.